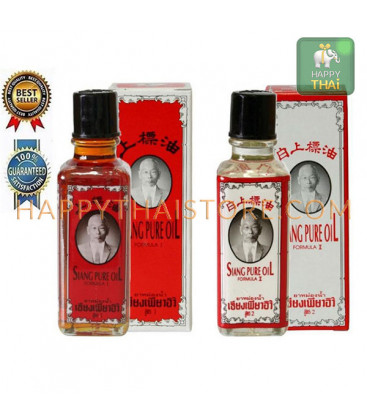 Based upon a formula passed down through generations of traditional Chinese medicine practitioners from the Shantou region, Siang Pure Oil is made purely of herbs without any chemical additives.

Siang Pure Oil Formula I is an herbal wind oil product that has a distinctively refreshing and soothing aroma because it contains various mixtures of essential oils, so this herbal wind oil can be used as an inhaler to help relieve nasal congestion and relieve headaches. Besides this wind oil can also be applied to help relieve flatulence, pain, and cramps in muscles and joints, and itching due to insect bites.

Siang Pure Oil is produced by Bertram Chemical Co., Ltd which is a large Thai pharmaceutical company that has been established since 1963, where Pure Oil Day products have been exported everywhere such as Thailand, China, United Arab Emirates, Malaysia, Indonesia, Singapore, Vietnam, Cambodia, and several European and American countries. Please note that all Siang Pure products from Bertram Chemical are made using herbal ingredients from natural sources without a mixture of chemicals, which is the goal of Bertram Chemical in producing traditional medicinal products.

Siang Pure Oil is made from various mixtures of essential oils such as menthol, peppermint oil, camphor, cinnamon oil, and specially mixed clove oil with the right composition to produce high-quality wind oil products and packaged in small glass bottles that make it easy to carry around anywhere.

Ways of working :
Lunch Pure Oil works effectively to give a refreshing and soothing aroma effect when inhaled to help relieve breathing and congestion due to flu, while also helping to calm the mind to relieve headaches.

Lunch Pure Oil also works effectively to give a warm and cold effect when applied to help relieve flatulence, relieve pain and cramps in muscles and joints, and reduce itching due to insect bites.

Benefits:
Helps relieve nasal congestion, relieve headaches, dizziness, and flatulence, relieve pain and cramps in muscles and joints, reduce pain and swelling due to sprains, and reduce anger and itching due to insect bites.

Warning :
This wind oil should not be drunk. may not be used on children under 3 years. Avoid contact with eyes, mouth, or other mucous membranes. Cannot be used for wounds. Stop use and contact a doctor immediately if skin irritation occurs.

Menthol has been widely used to help overcome various types of digestive complaints, one of which is flatulence. Where according to the results of the study showed that menthol acts as a carminative or substances that work to prevent and reduce flatulence. In addition, menthol also has anti-inflammatory activities so that it can help deal with inflammation of the skin due to itching or insect bites, and helps relieve pain such as cramps, muscle aches, sprains, and headaches.
Peppermint Oil (Mint Oil) has proven effective in helping to relieve pain and help relax tense muscles.
Effective camphor helps to relieve itching and helps to relieve pain and swelling. In addition, camphor also has a decongestant activity, so it can help relieve breathing such as a blocked nose due to flu or cold weather.
Cinnamon Oil has the effect of helping to improve blood circulation so that it can help alleviate complaints of headaches due to flu, by relaxing blood vessels. In addition, according to research at National Taiwan University, states that cinnamon oil has an anti-inflammatory activity that can help relieve stiffness in muscles or joints and other inflammation.
Clove Oil (Clove Oil) is effective as a natural antiseptic to help relieve itching complaints due to prickly heat, fungal infections, or due to insect bites. Clove oil is also useful to help relieve stress by helping to calm the mind so that it can help relieve headaches due to stress and overcome disorders of insomnia.

Be the first to write your review!

30 other products in the same category:

To be determined Shipping
0 ฿ Total